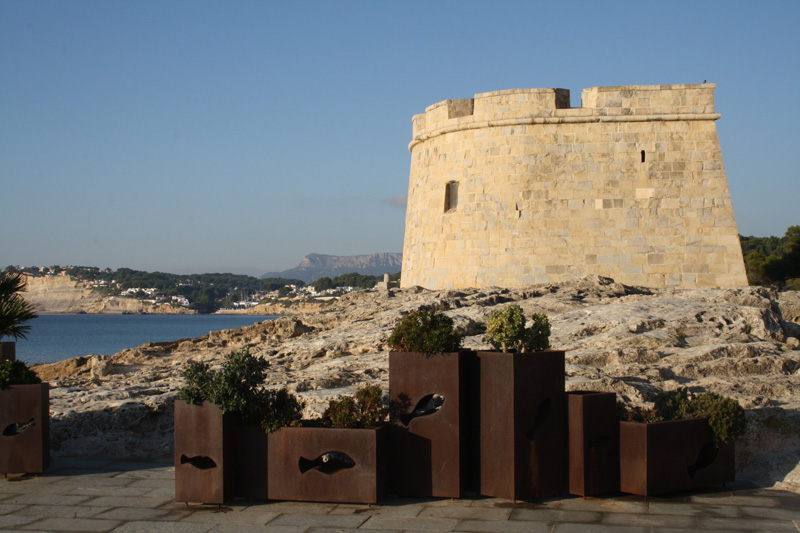 Moraira is one of the most popular and fashionable places on the Costa Blanca. Originally it consisted of only a few houses and warehouses built and used by the fishermen of Teulada. With its Club Nautico, the fishing harbour has developed into an elegant marina. The Castillo Santa Barbara, built in the 18th century to protect the coast from pirates, is known directly on the Playa de Ampolla. In the centre of Moraira there are several apartment houses, but relatively few, so apartments are relatively expensive compared to other properties such as villas and houses. Due to the popularity of properties in Moraira and the surrounding area, there are a large number of real estate agents who all access the same property pool due to the limited number of houses and villas on the market. For this reason we work together with almost all real estate agents in order to always be able to offer our clients the best selection.

Moraira itself, like Denia and Javea, has a variety of restaurants and cafés with dishes from all over the world and typical Spanish cuisine. The pedestrian zone offers a variety of boutiques and other shopping facilities as well as all kinds of water sports, regardless of other sports.

Here we find many very different places and urbanisations. The most prestigious and expensive are El Portet and Pla del Mar because of their proximity to the centre of the village and the beach of El Portet. Some of the villas in Moraira - and of course the most expensive - have sea views and are within walking distance of the centre. Most of the few apartment houses are located in the city centre compared to other seaside resorts, although some can be found on the coastal road to Calpe and in Sol Park. Another part of Moraira is called Benimeit, a towering mountain with spectacular sea views and - depending on the view - also quite steep heights. Also very good locations of Moraira are Pinar del Avocats, which is close to the beaches, and Sabatera. The prices of villas and houses in Moraira vary according to age and distance to the beach. Cap Blanc is another good location. Paichi is located on the Moraira side of the Cumbre del Sol, actually also a nice location, but not as popular as the others. In the Sabatera area, several houses are currently being built in the modern style, so that for those who do not necessarily appreciate the traditional Mediterranean style, there is something for their requirements. Continuing along the coastal road towards Calpe is the San Jaime residential development, which is part of Moraira and part of Benissa. This urbanisation is also highly appreciated for its proximity to a large supermarket, doctors, beach and especially the golf course. From many houses and villas in this urbanisation you ideally have both sea views and views of the golf course.

In summer, Moraira hosts several fiestas, the most important of which is "Moros y Cristianos", during which a procession through the centre of the town takes place, and in one of the days a fight is simulated on Ampolla beach between the Christians and the Moors.